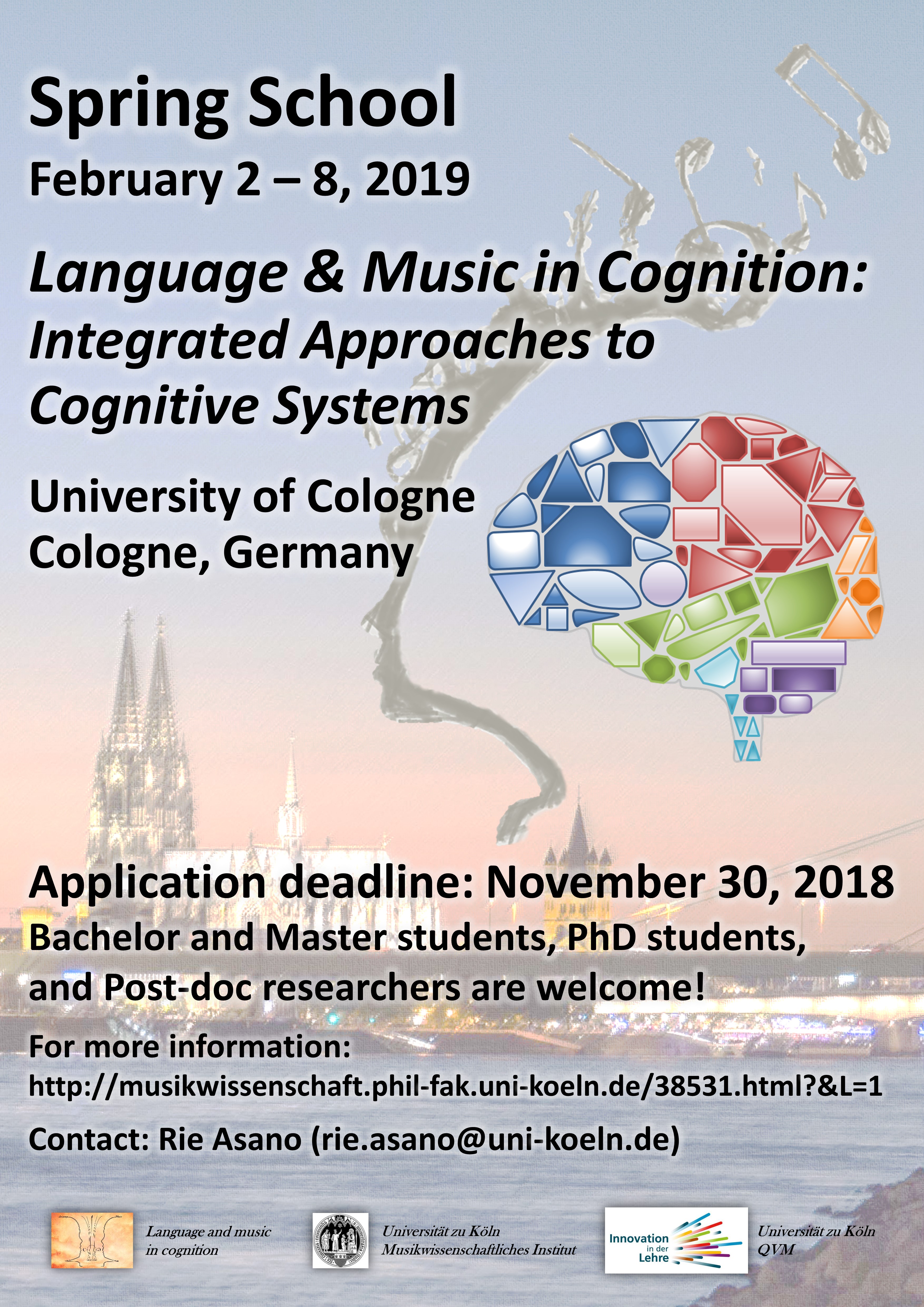 We are happy to announce our spring school of “Language and Music in Cognition” taking place in Cologne, Germany, from February 2nd to 8th, 2019.

If you wish to participate in this spring school, please apply until November 30th, 2018.
For more details, please visit our homepage:
http://musikwissenschaft.phil-fak.uni-koeln.de/38531.html?&L=1

Important details are also summarized below.

If you are interested in participating in this spring school, please submit your application (motivation letter and CV) until November 30th, 2018.
You can find information about the application process here:
http://musikwissenschaft.phil-fak.uni-koeln.de/38573.html?&L=1

This spring school offers lectures given by experts in different research areas. The topics include:

In addition to the lectures, there will be workshops, group work sessions, discussion sessions, and a poster session. Applicants are invited to contribute their own work to the poster session. An abstract of the poster can be also submitted via the application form until November 30th, 2018. 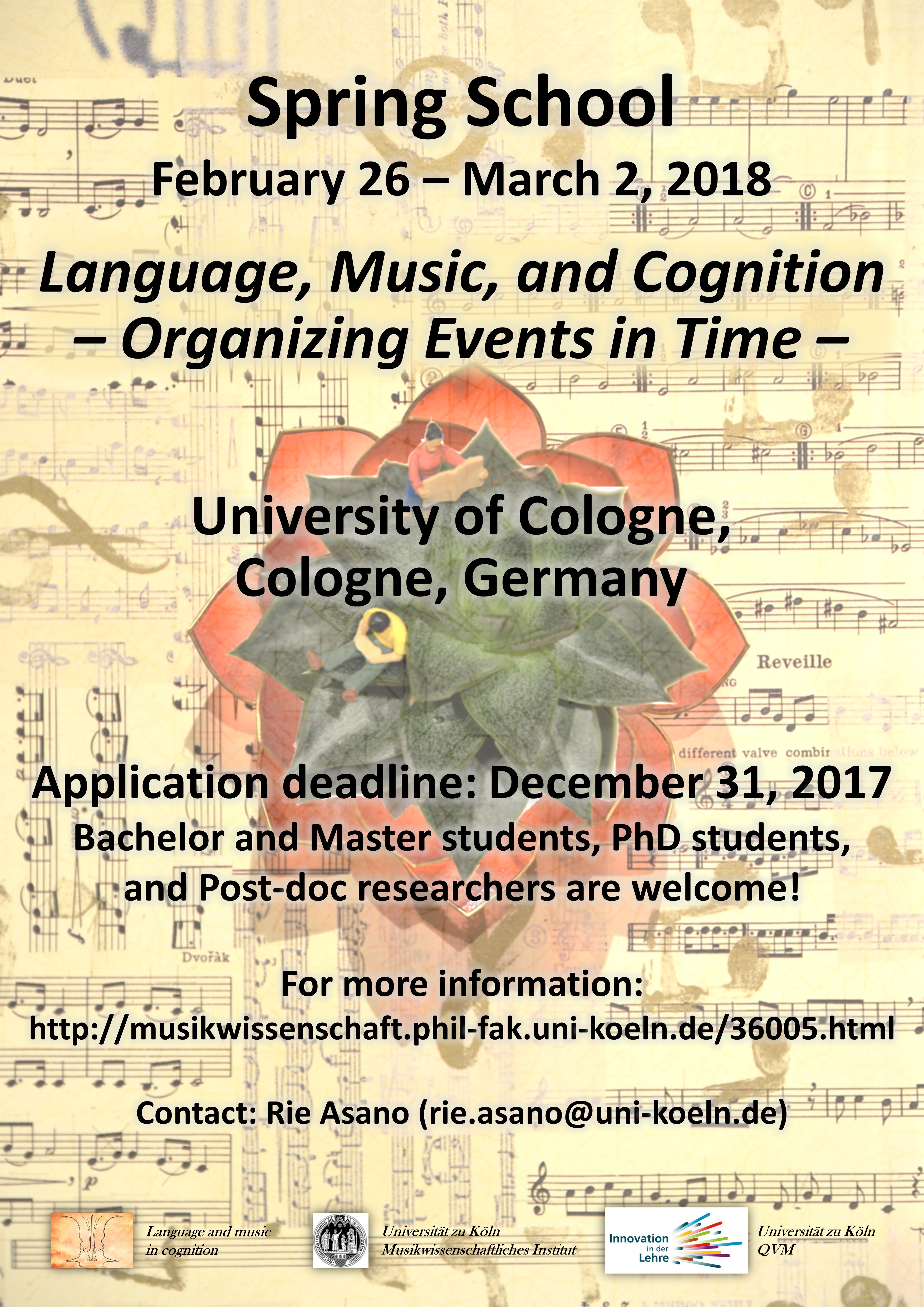 We are happy to announce our spring school of “Language, Music, and Cognition” taking place in Cologne, Germany, from February 26th to March 2nd, 2018.

If you wish to participate in this spring school, please apply till December 31st, 2017.
For more details, please visit our homepage (http://musikwissenschaft.phil-fak.uni-koeln.de/36005.html?&L=1).

Overview:
“Language, Music, and Cognition” is an international spring school held from February 26th to March 2nd, 2018 at University of Cologne, Cologne, Germany. Participation to the spring school is free of charge.

If you are interested in participating in this spring school, please submit your application (motivation letter and CV) till December 31st, 2017.
You can find information about the application process here: http://musikwissenschaft.phil-fak.uni-koeln.de/36007.html?&L=1

This spring school provides lectures given by experts in the respective research areas including biology, psychology, neuroscience, musicology, linguistics, and computer science. Along with the lectures, there will be group work sessions and a poster session. Applicants are invited to contribute their own work to the poster session. The abstract of the poster can be also submitted via application form till December 31st, 2017.

We welcome contributions (15-20 minutes including questions) describing original research on the evolutionary origins of music (see workshop description below for details). Experimental and empirical contributions are particularly encouraged. Short abstracts (.doc files following the standard Evolang format) of max. 1 page (including references) should be sent to evomus.cogbio@univie.ac.at with “Evolang Workshop Submission” as subject. Confirmation of submission will be given.

The purpose of this workshop is to (i) provide a common platform for researchers from a range of fields (syntax, phonology, typology, biomusicology, ethnomusicology, neuroscience, etc) to compare results and methodologies, (ii) discuss and integrate findings from different disciplines within the evolutionary and cognitive frameworks, (iii) develop critical hypotheses whose empirical testing can shed light on issues at the frontier between the evolution of language and music.
EvoMus: The evolution of music and language in a comparative perspective
This workshop will hence compare recent findings on language and music along three lines of inquiry: evolutionary, cognitive and methodological.

The 10th International Conference on the Evolution of Language will be held on 14th-17th April 2014 in Vienna at the Department of English of Vienna University.

The 10th International Conference on the Evolution of Language (Vienna, April 14th-17th, 2014) invites substantive contributions relating to the evolution of human language. Submissions may be in any relevant discipline, including, but not limited to, anthropology, archeology, artificial life, biology, cognitive science, genetics, linguistics, modeling, paleontology, physiology, primatology, and psychology. Normal standards of academic excellence apply.

Submitted papers should aim to make clear their own substantive claim, relating this to relevant scientific literature, and briefly setting out the method by which the claim is substantiated, the nature of the relevant data, and/or the core of the theoretical argument concerned. Submissions may be theory-based, but empirical studies should not rest on preliminary results.

For both podium and poster presentations, there are two possible types of submission: (a) Full papers, which can have a length of between 6 and 8 pages, and (b) Abstracts, which can be up to 2 pages long.

All accepted submissions will be published in a bound proceedings volume to appear before the start of the conference.

For detailed instructions on how to submit a paper or poster go to the submission section.

In conjunction with the LSA Special Interest Group on Biolinguistics, we invite the submission of abstracts for a workshop on methodology in biolinguistics, to be held on July 12, 2013 at the LSA Summer Institute at the University of Michigan.

The goal of biolinguistics is to explore theories of language that are biologically plausible as part of an effort to explain how the faculty of language arises both ontogenetically (over the course of an individual’s lifetime) and phylogenetically (on an evolutionary timescale). The LSA Special Interest Group on Biolinguistics, founded in 2009, seeks to explore these questions as well as to help the field of biolinguistics define itself by, as stated in the SIG description, “helping to identify what makes biolinguistics ‘bio’ (and ‘linguistic’), initiate discussions on how it differs from previous models of generative grammar (and how it doesn’t), debate whether generative grammar is actually a prerequisite […] and so on.”

In this workshop, we will foster dialogue on biolinguistic methodology. This topic emerged as a topic of interest and concern during the roundtable discussion at the end of the Workshop on Biolinguistics Organized Session at the LSA Annual Meeting in Portland, January 2012. Specifically, we aim with this workshop to field presentations about how biolinguists (both practicing and aspiring ones) can contribute to interdisciplinary dialogue and be informed consumers of data and literature from fields such as genetics, archaeology, and evolutionary biology. We will also feature morning and afternoon roundtable discussions with the speakers.

Abstracts for 30-minute oral presentations should be anonymous and between 200-500 words. Please, no more than one single-authored and one joint-authored abstract per person.

Graduate students are encouraged to submit an abstract (max. 500 words) for either a spoken paper or a poster presentation by April 15, 2013. Papers should be twenty minutes in length followed by a question period of ten minutes. Poster presentations will offer the possibility to discuss one’s research in greater depth. The SysMus13 conference language is English.
Abstracts will be evaluated by an international review committee consisting of doctoral and post-doctoral students representing an array of subfields of systematic musicology. The committee will announce its decisions based on double-blind peer review by June 15, 2013.

Abstracts should be submitted to the address openconf site and should comply to the .word template available at this link.

The IXth Progress in Motor Control meeting will be held in Montreal, Canada from July 14-16, 2013. The meeting features Motor Control researchers from around the world with some of the leading names expected to attend.

The three-day meeting brings together experts in diverse areas of Motor Control including the performing arts, such as dance, circus arts and music. There will be two scientific plenary sessions per day addressing the following areas:

The confirmed speakers include

This one-day SEMPRE conference hosted by the University of Hull will include invited presentations, a specialist workshop and selected submissions from researchers on the theme of music and empathy. In recent years there has been a growing interest in empathy in the fields of music psychology and education. Research in music and empathy now spans a variety of contexts, including education and development, emotion, expressiveness, and performance. This conference seeks to draw together current research from a range of areas, and to encourage and stimulate discussion on research in music and empathy.

SUBMISSIONS
Contributions are welcome from researchers at all levels and are particularly encouraged from postgraduate students. Submissions should show how the topic relates to the conference theme. Accepted submissions will be broadly organised into themes, and presentations will be chaired by leading researchers. Please send abstracts for spoken papers (max. 200 words) by email to Caroline Waddington (contact details below) by Friday 16 August 2013.

The concept of infinity has fascinated philosophers and mathematicians for many
centuries: e.g., the distinction between the potential and actual infinite appears in Aristotle’s Physics (in his treatment of the paradoxes of Zeno) and the notion was implied in the attempts to sharpen the method of approximation (starting as early as Archimedes and running through the middle ages and into the nineteenth century). Modern mathematics opened the doors to the wealth of the realm of the infinities by means of the set-theoretic foundations of mathematics.

Any philosophical interaction with concepts of infinite must have at least two
aspects: first, an inclusive examination of the various branches and applications, across the various periods; but second, it must proceed in the critical light of mathematical results, including results from meta-mathematics.

The conference History & Philosophy of Infinity will emphasize philosophical, empirical and historical approaches. In the following, we give brief descriptions of these approaches with a number of questions that we consider relevant for the conference:

2. Various empirical sciences deal with the way we as finite human beings
access mathematical objects or concepts. Research from mathematics
education, sociology of mathematics and cognitive science is highly
relevant here. How do we represent infinite objects by finite means?
How are infinite objects represented in the human mind? How much is our
interaction with infinite concepts formed by the research community?
How do we teach the manipulation of infinite objects or processes?

3. Infinity was an important concept in philosophy and theology from the
ancient Greeks through the middle ages into the modern period. How did
the concepts of infinity evolve? How did questions get sharpened and
certain aspects got distinguished in the philosophical debate? Did
important aspects get lost along the way?

FotFS VIII is sponsored by the ESF network INFTY: New frontiers of infinity.

The biennial meeting of the Society for Music Perception and Cognition will be held at Ryerson University in Toronto, Canada, on August 8-11, 2013.

Abstracts for presentations should be no longer than 300 words and should describe the motivation, methodology, results, and implications to the degree that this information is available at the time of submission.  Empirical contributions should refer to the stimuli/corpus, methodology, and data collected.  Theoretical contributions are also welcome, provided that the connection to music perception and cognition is underscored through discussion of aims, methods, and/or results. Abstracts for proposed symposia are welcome and should include individual abstracts as well as a brief description of the theme.

Submission details and additional conference information are available on the conference website:
http://www.smpc2013.com/ 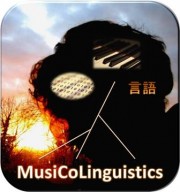